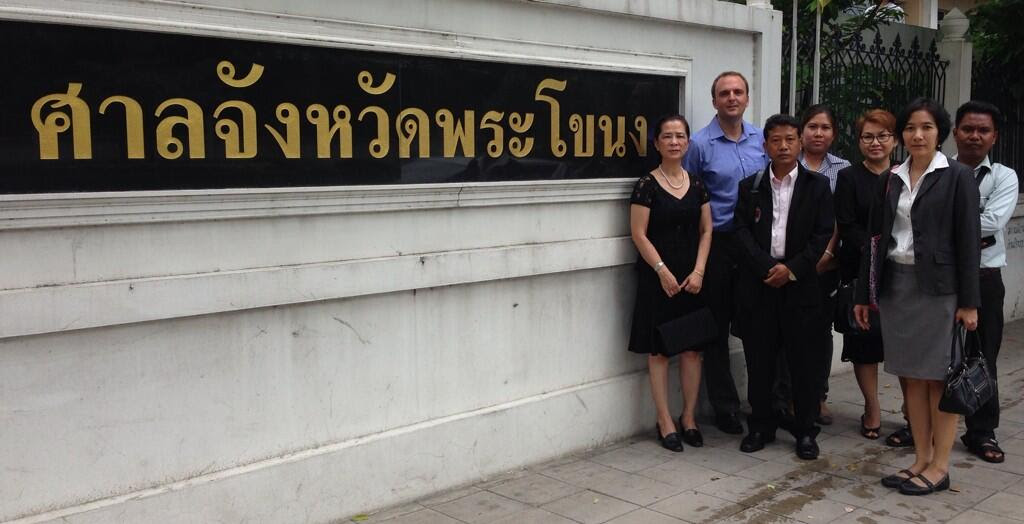 Andy Hall and his team, with TFFA/TTIA representatives, in front of the Prakanong Court prior to his detention pending bail on 18th June 2014
British migrant rights activist Andy Hall, who campaigns to improve conditions for migrant workers in Thailand, will face Prakanong Criminal Court at 830am on Wed. 2nd July in his first formal appearance before a Thai court in numerous criminal and civil cases filed against him by Natural Fruit Company Ltd.

This first hearing, that consists of court ordered negotiation between the plaintiff and defendant then a formal court hearing to determine dates of witness hearings, follows the decision of Thailand’s Attorney General on 18th June 2014 to prosecute the latest criminal case filed against Hall by Natural Fruit. The charge relates to an interview Hall did for Aljazeera in Myanmar in early 2013.

Hall was briefly detained in a court cell and then released on bail on 18th June. The Thai Frozen Foods Association (TFFA) and Thai Tuna Industry Association (TTIA) provided the bail as a symbol of support for Andy Hall’s work as a human rights defender and migration expert.

As a condition of bail imposed by Prakanong Court prior to Hall’s release from detention on 18th June, his British passport was confiscated and he cannot leave Thailand unless the court approves his departure, the case against him is considered and rejected or if found guilty, until he has served his sentence.

The British Embassy in Bangkok has provided no recent assistance to Hall despite numerous requests and the UK governments recently strengthened human rights defenders policies to be implemented stringently by overseas missions. The UK Government did not send officials to assist Hall during his formal arraignment and detention nor to previous police station interrogations of which they were aware. The Consul at the Bangkok Embassy advised Hall confiscation of passports by Thai courts was usual practice to which they would generally not interfere.
Hall said today: ‘No meaningful negotiation is likely to occur on 2nd July unless Natural Fruit agrees to drop all charges against me. I have done nothing wrong and welcome the courts deliberations on this case, its consideration of all the evidence, and expect to be found not guilty of all charges against me.‘
Natural Fruit Co. Ltd., a company based in Prachuap Khiri Khan Province of Thailand, began a series of civil and criminal prosecutions against Andy Hall in February 2013. Charges relate to his role in conducting interviews with migrants from Myanmar working in the pineapple and tuna export industry to assist Finnwatch to compile a report, Cheap Has a High Price. This report, released in Jan 2013 and updated in Jan 2014, outlined particularly poor labour conditions in Natural Fruit’s factory, selling pineapple concentrate to Finnish supermarkets.
Legal action against Hall has raised international criticism. In addition to Finnwatch, numerous NGOs and global union federations have condemned the harassment. 5 UN Special Rapporteurs have sought clarifications amidst concern Hall is being targeted for his work to promote migrant rights.
Together Natural Fruit has raised 4 charges against Hall. The initial 2 criminal charges relate to defamation by publication/propagation under the Thai Criminal Code and breach of the Computer Crimes Act, for which initial hearings have begun but the case awaits summons delivery confirmation by the Bangkok South Criminal Court. A third charge relates to civil defamation. The latest and fourth charge against Hall, Natural Fruit Company Ltd. filed additional criminal charges against him at Bangna Police Station for criminal defamation.
If found guilty of criminal charges laid against him at Bangkok South Criminal Court, Hall could face together seven years in prison per count. Natural Fruit are also claiming 300 million baht ($10 million) in damages from Hall in the civil case filed at Nakhon Pathom Civil Court. The latest charges at Bangna Police Station that were today taken forward by the Attorney General and Prakanong Court carry a maximum sentence of one years imprisonment and a fine not exceeding 20, 000 Baht (US$650).
Serious problems in Natural Fruit’s labour conditions have been highlighted in several other reports and research as well as the Finnwatch report, to which Hall assisted initially. According to Finnwatch’s information, Thai authorities have not raised any legal actions against Natural Fruit.
For further information, please contact:
1. Andy Hall, Migration Researcher: +66(0)846119209, andyjhall1979@gmail.com (twitter@atomicalandy)
2. Nakhon Chomphuchart, Legal Advisor to Andy Hall: +66(0)818473086, nakhonct@gmail.com
3. Sonja Vartiala, Executive Director, Finnwatch: +358 445687465, sonja.vartiala@finnwatch.org
For background information on Andy Hall’s case see www.andyjhall.wordpress.com and http://finnwatch.org/en/news/194-andy-hall-was-formally-detained-and-released-on-bail