Below is a brief summary of the state of play in Natural Fruit vs. Andy Hall  criminal and civil prosecution cases (n.b. more details on each specific case is available in the CASE tab on this blog site). 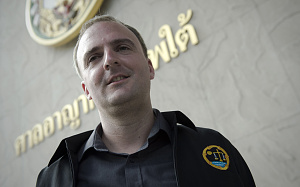 Concerns an Aljazeera video interview given by Andy Hall to Aljazeera correspondent Wayne Hay in Yangon, Myanmar in April 2013. A criminal defamation charge relating to this interview, broadcast by Aljazeera, was filed originally by Natural Fruit Company Ltd. management and their lawyers at Bangna police station in Bangkok in July 2013. The charge has a maximum of 1 years imprisonment as penalty/sentence if convicted. At this time Andy Hall was a resident of Myanmar.

Hall voluntary attended for questioning on the charge at Bangna Police Station in September 2013 and allegedly was asked to sign a confession despite expressing verbally his intent to plead not guilty to all the charges. He refused to sign any documents and left the police station. Andy Hall then again attended the police station voluntarily in May 2014 to give another statement, again pleading not guilty to all the charges after which the police officer in charge of the case formally typed up the statement and Andy Hall signed the statement to confirm his not guilty plea.

On 18th June 2o14, this case filed by Natural Fruit Company Ltd. was formally accepted for prosecution by the Attorney General and Prakanong Public Prosecutor. Andy Hall was on the same day charged, detained in a holding cell at the court and then released on a 50, 000 Baht bail (provided jointly by the Thai Frozen Foods Association and the Thai Tuna Industry Association). Following detention, Andy Hall’s passport was confiscated and his freedom to leave Thailand blocked at all official border crossings. The block could be lifted only if permission to leave the country was granted by the court, on a case by case basis. Permission was granted for Andy Hall to leave the country for all but one request.

On 29th Oct 2014, Prakanong Court dismissed the case against Andy Hall citing unlawful investigation/prosecution as the basis for its decision. Andy’s passport was returned to him and he was again allowed to freely travel in and out of Thailand.

The Attorney General and Natural Fruit appealed the case dismissal decision to the Appeals Court in Jan. 2015. A decision on this appeal is now expected on Friday 18th Sept. 2015 at Prakanong Court.

No further hearings will be undertaken in this case prior to the decision on the appeal expected on 18th Sept 2015.

Concerns publication and dissemination of a Finnwatch report that cited data from interviews with workers employed by Natural Fruit Company Ltd. Natural Fruit pressed charges against Andy Hall under the Computer Crimes Act and for criminal defamation directly at Bangkok South Criminal Court. The charges carry a maximum of 7 years imprisonment as sentence/penalty if convicted.

Commencing with 9 appointments, the case then continued into 7 preliminary hearings with numerous prosecution witnesses giving testimony that took place at Bangkok South Criminal Court on 17th Nov 2014, 2nd Feb 2015, 16th Mar 2015, 20th April 15, 14th May 15 and 20th July 2015. Andy Hall was not in attendance at these hearings but his lawyers represented him at the hearings and cross examined the prosecution witnesses on his behalf. Natural Fruit was able to produce its own witnesses to the court during preliminary stage hearings to try to convince the court to indict Andy Hall and hear the case in full. Defense lawyers had the opportunity only to cross-examine prosecution witnesses if they desired but not to introduce their own evidence. In preliminary hearings Natural Food called factory management, owners, staff, migrant workers, academics and other concerned parties.

A decision by Bangkok South Criminal Court to indict Andy Hall was made on 24th August 2015. A hearing was then assigned on 19th October 2015 for Andy Hall to be formally indicted/charged, plead on the charges and then he will likely be detained and can apply for bail pending a decision of the court. The case is expected to commence as a full trial in 2016.

Concerns the above mentioned Case 2 Finnwatch report. A 300 million baht civil defamation/damages claim case was filed against Andy Hall in Nakhon Pathom civil court. Negotiations between the 2 parties failed on 30th Oct 2014 and the court postponed consideration of the case until a verdict of Case 2 given the case concerns substance similar

Concerns the Aljazeera Yangon interview mentioned in Case 1. A 100 million baht civil defamation/damages claim case was filed against Andy Hall in Prakanong Court. A summons was reportedly not lawfully delivered to defendant. On 21st Nov 2014 a hearing took place and scheduled next hearing in the case was Mar. 23rd 2015. In May 2015 a hearing again took place and the court/prosecution reportedly informed that the summons documents had not yet been successfully served on the Andy Hall in Myanmar. The court then adjourned the next hearing on the case to 16th Nov 2015 to allow adequate time for the summons and documents to be formally served on Andy Hall in Myanmar.